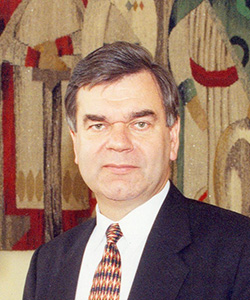 Author of numerous fundamental researches, well-known organizer of Education and Science, state and a public figure.

Vasyl Kremen’s  scientific  research covers a wide range of problems, the central of which is the

theoretical and methodological basis of education and science of Ukraine, the definition of fundamental principles and directions of  development  of philosophy of education, working up  conceptual issues of  the modern social philosophy. In his researches Vasyl Kremen pays special attention to the globalization

Academician Vasyl Kremen is author of  about 1000 scientific papers.

• «Collectivity and individuality: the fate of one of the key socialist ideas" (1990)

• «Ukraine: the path to itself. Problems of social transformation "(1999)

• «Philosophy of person centred approach in strategies of educational space" (2009)

• «Ukraine in the era of globalization (metadisciplinary research outlines)" (2013)

Textbooks:  for higher school: "Politology: the science of politics" (2002)

1994 - awarded the academic title of professor

1998-2000 - Deputy of the Verkhovna Rada of Ukraine, Chairman of the Subcommittee of Professional Education of the Committee of Science and Education

2000 - elected academician of the National Academy of Sciences of Ukraine; appointed Board member on Science and Science and Technology Policy under the President of Ukraine

2001 - elected  foreign member of the Russian Academy of Education

2002 - appointed Deputy Chairman of the Committee of the State Prize of Ukraine in Science and Technology; appointed Presidium member Higher Attestation Commission of Ukraine; awarded the Order "For Merits" third degree

2005 - awarded the State Prize of Ukraine in Science and Technology

2010 - appointed  the Humanitarian Council member under the President of Ukraine

2011 - awarded the Gold Medal of the Russian Academy of Education "For Achievements in Science"; appointed Deputy Chairman of the Committee of State Prizes in Education

2012 - awarded the Order of Prince Yaroslav the Wise V degree

Practical steps in the educational and scientific sphere of Ukraine carried out under the leadership of Vasyl Kremen in 2000-2005 had conceptual integrity and logically continued theoretic scientific researches. In 2001 the Second All-Ukrainian Congress of Educators approved the National Doctrine of Education Development, which defined the strategic direction of education in Ukraine. It was Vasyl Kremen’s initiative and under his direct leadership there was an active process of transition from authoritarian pedagogy to pedagogy of tolerance in the country, the education system of Ukraine is approaching educational systems of developed European countries, is being implemented innovative public policy in the field of education and science. The secondary school moves to the new content and twelve-year study. Learning a foreign language was introduced at the second form. Ukrainian language as the state language is studied by all students. Ukrainian language teaching students’ number has increased from 62% in 1999 to almost 75% in 2005. Students’ academic achievements are evaluated with twelve-mark system. Transition to profile school is reasoning. Computerization of secondary schools was mostly done. In 2003 Ukraine’s Government adopted and launched the program "School Bus". The Program for production and providing educational institutions of   new generation teaching facilities for natural and mathematical and technological sciences was approved. Experiment introducing external independent assessment of students was started. Systemic changes took  place in higher education of Ukraine. Higher school was prepared to join the Bologna process, accession to which formally took place in May 2005. During several years, a loan from the World Bank was preparing to get for the Development of Education in Ukraine, which began in 2006. Students’ number of higher education institutions considerably increased. Changes have affected the economic sphere of the branch. Science and education funding increased. New forms of organization, including technology parks are approved. Arrear of wages to teachers and scientists were completely settled off. Working conditions improved significantly. In 2004 only the student scholarship grew more than twice. For the first time in modern history, the average wage in education has exceeded the corresponding figures in the field of health care, culture and others.

Just under the leadership of Minister Vasyl Kremen social consciousness had changed with regard to the fateful function of education and science. As a result of his many years Minister’s activity the monograph "Education in Ukraine: the innovative aspects. Strategy. Implementation. Results." was published in 2005. There were the long-term modernization plans, their analytical and predictive validity and direction of implementation in it. A large researchers’ team headed by Vasyl Kremen and with his participation created the first in the history of Ukraine "Encyclopedia of Education," which was published in 2008.

On the initiative and under Vasyl Kremen’s editorship in 2010-2011 several editions in a row leaved the "White Book of National Education of Ukraine," which contained a detailed scientific analysis of all education units and areas with their problems and a forecast of overcoming them. For the first time on the territory of Ukraine a weighty document "National Report on the status and prospects of education in Ukraine" prepared by scientists of the Academy edited by Vasyl Kremen was created  (2011).

Vasyl Kremen pays much attention   the integral and political analysis of the main stages of Ukrainian history, the results of which several books (co-authored) were published. In 1996 the work "Ukraine: Development Alternatives (criticism of historical experience) " was released, which suggested concerning rethinking the historical experience of the Ukrainian people towards his self-affirmation in the nation-state, a constructive discussion was suggested on further development of Ukraine as one of the largest European countries.

Three years after the monograph "Ukraine: the path to itself. Problems of social transformation" appeared which covered the specificity of reforms in Ukraine since its independence in the context of centuries of historical experience and two strategic targets were highlighted - building of a welfare social state and development of a civil society.

Logical extension of this line of research becomes an individual monograph "Philosophy of the national idea: Person. Education. Society "(2007), in which author offers his vision of solving the problems of development of independent Ukraine - through the formation of a unified national idea for the entire nation-state – adoption of a common history of the people, national philosophy and education, in the unity of theory and practice.

Monographic study reveals the genesis of the Ukrainian idea - from the formation of Ukrainian identity prior to becoming an independent state, from the culture of identity to the national spirituality. The book was seen by Polish scientists and published as «Filosofia edukacji» (Radom, 2008). In 2013 he published a monograph «Ukraine in the era of globalization (metadisciplinary research outlines)" (2013),  which deals with the integration of Ukraine into the globalized world and the preservation of its identity.

The deep scientific research of the development of Ukraine in the wake of the progressive footfall history gets  academician Vasyl Kremen to reflect on the philosophical fundamentals that would respond modern demands in fundamental science on principles and perspectives of human existence. And the scientist puts forward the idea and comprehensively substantiates philosophy of person centred approach as a response to challenges of the modern globalized world, as a new type of metaworldview,  directly involved in the highest sense of genesis of  an individual and simultaneously that provides the everyday life of every individual, society and humanity in general filled with  humanistic content and values​.

In 2009 he published a monograph "Philosophy of person centred approach in strategies of educational space." Extremely high demand in the scientific community and the broader contemporary cultural community, this work is reprinted in the following years (2010, 2011) as "Philosophy of   person centred approach in educational space."

As much as possible using advances in modern science, the author reveals the nature of person, identifying ways of self-affirmation through creativity, reviews the development of the balance of national and global, spiritual and rational, innovative and traditional. The extraordinary value of this work is an immersion of the theoretical foundations to the praxeology of education - an area which is been made to form a new individual who thinks and lives in a civilizational dimension of modernity. The monograph printed in Poland as «Filosofia antropocentryzmu w edukacyjnej przestrzeni» (Warszawa, 2011), has been praised by foreign scientific communities.

Under the leadership of V.Kremen the nationwide project "Higher Teacher Education and Science of Ukraine: History, Present, Future", in which almost every region​​printed a separate volume on the development of pedagogic education and science in.

V.Kremen pays particular attention to the working out of textbooks. In 2005 he published a textbook "Philosophy. Thinkers. Ideas. Concept ", which started a new direction in the creation of textbooks for higher school: the authors were able to avoid the traditional monoideological and theoretical bias in the presentation of the material. Perhaps the first time the comprehensive analysis of the fundamental problems of world philosophy, the content of the basic philosophical ideas, theories, views that are generally accepted and confirmed in practice, disclosed their genesis in the evolution of culture are presented in a textbook on philosophy.

The volume "Philosophy: Logos. Sofia. Mind" (in the same co), which discloses the meaning of philosophical knowledge, has evolved from the" Logos "(word), through the" Sophia "(wisdom) to the" rational "(mind). Analysis of philosophic schools, trends, fundamental ideas are presented in their influence the development of spiritual culture of mankind.

The feature of the publication is also considerable attention to the trends of modern philosophy, strategies of the global spiritual culture, as well as the genesis of Ukrainian philosophic thought. Working out textbooks was continued by publication of the "Philosophy: History, Society, Education", which was released in 2011.

There are tutorials "Philosophy of management", "Politology: the science of politics", "Philosophy of communication" and others. In 2012 a textbook "Philosophy" for the 11th form profile secondary school. Continuing the philosophic understanding of modernity problems is embodied in the collective monograph "The phenomenon of innovation: Education, Society, Culture" (2008), "Ukraine in Europe: the context of international relations", "Elite: Origins, Nature, Perspective" (published in 2011), "Synergetics in Education: Aspect of the person centred approach" (2012). In all his works V.Kremen considers methodological issues through refraction in the education and pedagogic areas as a fundamental idea of his philosophic and education guidance is as follows: "Education fills human spirituality, makes him to think about the meaning and value of his existence. It determines the basic contours of the real culture for him, which is inscribed goodness, beauty and truth. "

ANNOUNCEMENTS
The National Research Foundation of Ukraine announces a new call "Cambridge – NRFU 2022. Individual grants for research (development) for Ukrainian researchers (with the support of the University of Cambridge, UK)"
14:10 29.12.2022
About the General Meeting of the National Academy of Educational Sciences of Ukraine
11:11 18.10.2022
CALL FOR PAPERS for Education: Modern Discourses, No. 5, 2022 issue
16:16 04.08.2022