A Victorious Warrior for the Fate of Ukraine
On June 25, 2022, Vasyl Kremen, Ukrainian Scientist, Statesman, Reformer and Human centrist, celebrates his anniversary. 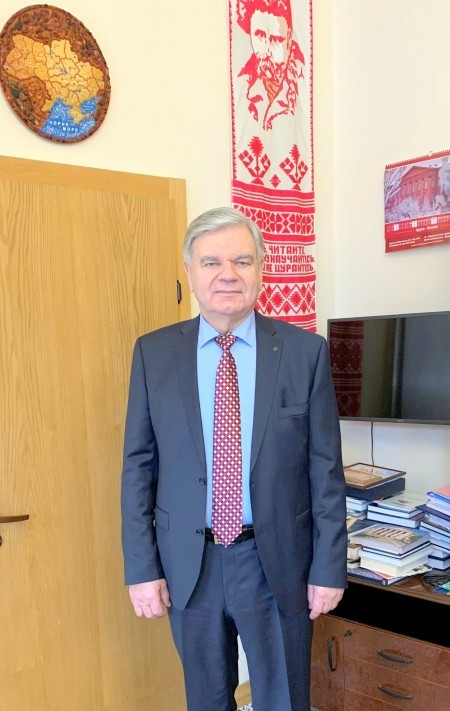 The leader by birth, Vasyl Kremen, has succeeded in any field of activity, and what is important is not just personal, but national. Take at least his activity as the Minister of Education and Science of Ukraine (he was the first to hold this position of the joint ministry). His scientifically substantiated ideas of democratization of society, attention and respect for man, development of personality for the purpose of progressive and consistent development of society - were productively and comprehensively implemented in steps to reform the education sector.

Note at least briefly. The secondary school is moving to a new content and twelve-year education. The study of a foreign language from the second grade has been introduced. Ukrainian as a state language is studied by all students. During the years of Minister Kremen′s leadership in the sphere, the number of students studying in Ukrainian has increased from 62% to almost 75%. And without any pressure and resistance. Learning achievements are evaluated on a positive twelve-point scale. The active preparation of the transition of the senior school to the profile is reasonably going on. Most of the computerization of secondary schools has been carried out. The implementation of the "School Bus" program has been accepted and started. The program on production and delivery to educational institutions of the new generation of equipment for studying of natural-mathematical and technological disciplines is approved. An experiment was conducted to introduce external independent evaluation. Applicants were allowed to take entrance exams and participate in the competition simultaneously at several universities. Also, another important innovation has been introduced - the possibility of studying at a university at the expense of a state loan with its subsequent repayment within a number of years.

The changes also affected the economic sphere of the industry. Funding for science and education has increased. New forms of its organization are being approved, including technology parks. Salary arrears to teachers and researchers have been completely eliminated. Teachers′ working conditions have significantly improved, and student scholarships have more than doubled in 2004 alone. For the first time in modern history, the average wage in education has been raised independently of other budget areas.

In general, the practical steps of education and science of Ukraine, carried out under his leadership, were conceptually coherent and logically continued the scientific and theoretical developments.

On his initiative and under his direct control, the country is in the active process of transition from authoritarian pedagogy to pedagogy of tolerance, Ukraine′s higher education system is approaching the educational systems of developed European countries, and innovative state policy in education and science is being implemented.

It was under the leadership of the industry Minister VG Flint broke in the consciousness of society regarding the fateful function of education and science.

The fact that the order of the Minister of Education and Science of Ukraine Vasyl Kremen to ban the persecution of student youth who sought to express their views during the events on Independence Square in 2004-2005 contributed to the victory of the Orange Revolution cannot be ignored. This order was assessed by the citizens of Ukraine as a manifestation of real democracy in the country by the patriotic establishment and was perceived as a call for a bold and open expression of will.

The further activity of Vasyl Kremen - President of the National Academy of Pedagogical Sciences of Ukraine, President of the Knowledge Society of Ukraine, Member of the Presidium of the NAS of Ukraine, Chairman and member of many state and public councils and associations of the highest level - convinces of deep decency and invariability of his human qualities. And further historical events - in the predictability of his scientific ideas, the correctness of management decisions.

His opinion is always on the edge of time, civilizational challenges and public expectations. His scientific monographs have always and now contain theoretical, philosophical and practice-oriented answers to topical questions related to the problem of man, his existence in the modern world, the meanings of his existence and human happiness.

Numerous state, scientific and public awards only partially reflect the significant achievements of Vasyl Kremen, a faithful son and a victorious warrior for the betterment of Ukraine.

So let us wish the jubilee health, inexhaustible energy, inspired work for the Victory over the eternal enemy of the Ukrainian nation and for the development of a European, free, prosperous Ukraine!